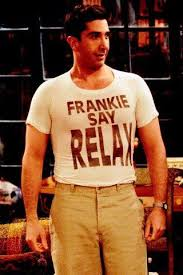 In the early to mid 1908’s there was but one t-shirt. Men wore it and Women wore it. No one really knows what it meant but everyone had to have one. It was a simple white t-shirt with a three word phrase “Frankie says Relax”. Who was Frankie and why was he asking us to relax? Was Frankie short for Francesca? Or lengthened from Frank. What kind of relaxation were they suggesting exactly? 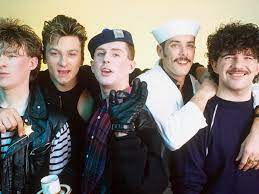 The roots of the t-shirt are based on a song by the  band Frankie goes to Hollywood. They were a new band that had grown out of the post punk scene. They had just scored a huge hit with their first single Relax. The band were open about their bedroom habits and their partner choices.  The song’s lyrics and the video they produced for it were  blatantly reflective of this. At first the BBC were fine with it, they even performed the song on Top of the Pops, only the ban ensured that it got to number one and stayed there.

Whether the band made any money out of the t-shirt sales is moot. The creator was Paul Morley of the band’s record label. He copied the designs of Katherine Hamnett and her large slogan t-shirts. The were numerous copies and fakes made and the image is still popular today as a nostalgia piece. You can get better Levi t-shirts for men EJ Menswear.