TV Dinners are defined as ‘pre-packaged frozen or chilled meal that usually comes as an individual portion.’ These packages contain all the elements of a meal in a form that requires very little preparation by the user.  The name comes from a United States branded product ‘TV Brand Frozen Dinner’ that was supplied in an aluminium tray and was heated in the oven.

One of the marketing ideas for these products was that the meals could be prepared easily and quickly and could be eaten whilst families sat together and watched television programs which was a popular 1950s pastime. Lap Trays certainly came in handy for this. Some examples can be found at https://personalisedlaptrays.co.uk/collections/lap-trays. Once you’ve got you TV dinner on your lap tray you are free to watch whatever programme you wish safe in the knowledge that you have a nutritious meal in front of you. Or do you? 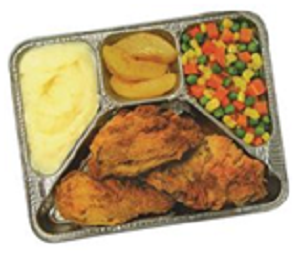 It wasn’t until the advent of the microwave that the TV dinner really took off and became such a staple. Many scoffed at the idea that people would be prepared to eat something prepared for them and then heat it up. Initially coming in metal aluminium trays to conduct heat the staple food was a meat of some kind combined with a mixed vegetable option and mashed corn or potatoes. Rice was also very popular as it leant itself to the reheating process. Many were suspicions though and some saw them as degrading the role of the housewife who wouldn’t stand for it. The marketers countered this be suggesting that you keep some in in case forgetful Hubby brought home an extra dinner guest from work that needed feeding. You could also save on the washing up as you could eat the entire meal in the tray.

Popular culture also felt the need to cast doubt on the humble product, even though people had been happy to eat them on airplanes where they were of similar standard and design. The group ZZ Top cast doubt with the lines “Twenty-year-old turkey in a thirty-year-old tin” and “I even like the Chicken if the sauce is not to blue” (for the record, no TV Dinner contained blue sauce) criticising the standard of the food available. There were some health concerns over the fact it was a frozen meal namely would it retain the quality. There slowly become real concerns about the amount of sugar and salt used in the making of the dinner. In modern times we are very aware of the ultra-processed food that is the ready meal.  The TV dinner soared in popularity due to its ease and convenience. The microwave oven opened the market even further for more food types as the metal tray compartments could be discarded. The true age of the convenience food had come.